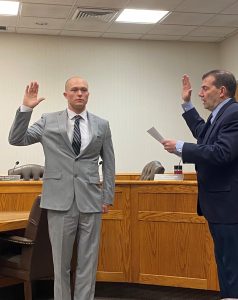 During its March 3 meeting, the Northampton Borough Council hired a new part-time police officer. Robert Lindsay, who also serves as a paramedic for St. Luke’s Hospital, will join the force immediately. He was sworn in by Mayor Anthony Pristash and warmly welcomed by council.

“You are going to be in great hands here,” Councilman Ronald Glassic told Lindsay, speaking of Police Chief Bryan Kadingo and the other officers in the borough.

Lindsay said he has heard “good things about the department” and looks forward to getting started.

During their meeting, council also hired a new part-time code enforcement officer. Jeffrey Brant will fill the role after passing a physical and background check.

Brant will join Code Officer Keith Knoblach during a busy time in the borough. Rental property registrations are in full swing. Knoblach reports that 292 rental properties are registered so far, which equals 56.9% of the rental units in the borough. The deadline for registration is March 31. Property owners who do not register their rental units will be charged a late fee.

Council did announce that rental registrations will soon be simpler for property owners. The borough is installing new software to provide online access to zoning and code applications. Funding for this software was provided by the American Care Act.

In other news, council passed a resolution to update the borough’s wastewater treatment plant to provide an additional 323 EDUs to accommodate the development needs of Allen Township. Developers must pay a tap-in fee of $5,070 per unit. This expansion is part of the borough’s Act 537 commitment.

Tillotson’s commitment to the borough was praised by members of council.

Tillotson, a high school junior, will remain on council until she graduates.

The next Borough Council meeting will be Thursday, March 17.