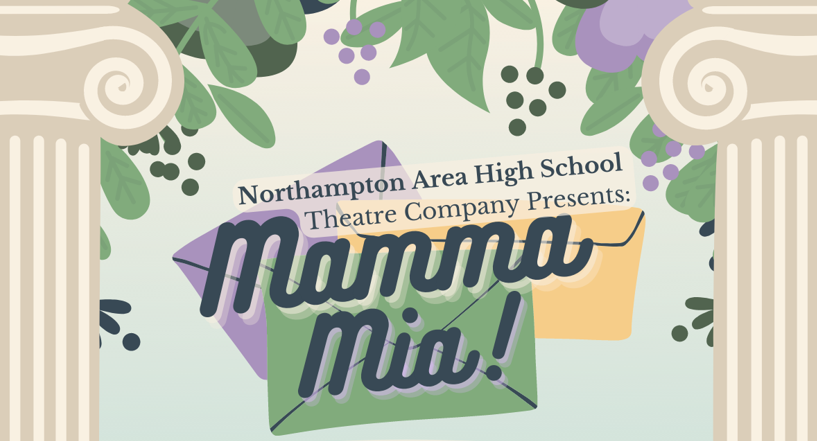 After a two-year hiatus due to COVID-19, live musical theater officially returned to Northampton Area High School with an energetic production of “Mamma Mia!” Performances were held March 24-27.

The popular musical, inspired by the mega-hit catalog of ABBA, transports audiences to an exotic Greek island and introduces Sophie, a young bride-to-be, searching for her birth father. When her three possible fathers show up just in time for her wedding, Sophie’s mother Donna is forced to reckon with her past life of love and heartbreak. The musical was brought to the big screen in 2008, with Meryl Streep starring in the role of Donna.

“I am a huge ABBA fan,” director and choreographer Gianna Neal wrote in the program. “This show was meant to bring joy to its audiences.”

Audience members were encouraged to dance, sing, and clap along as the cast performed ABBA classics like “Mamma Mia,” “Dancing Queen,” “Souper Trouper,” and “Take a Chance on Me.”

Senior Eliza Doll brought sassiness and spark to Donna in numbers like “Money, Money, Money” and “Mamma Mia,” while earning loud applause for her moving solo “The Winner Takes it All.” Fellow senior Maddy Rex embodied the innocence of Sophie in her performances of “Thank You for the Music” and “Under Attack.”

Sophie’s three possible fathers were played by Shawn-Tyler Laub (Sam), Will McMahon (Harry), and Max Eucalano (Bill). Sam is Donna’s “one who got away.” Portrayed by Pierce Brosnan in the film, Laub had the same swagger as he owned the stage behind a pair of aviator sunglasses. McMahon’s Harry is a lovable goofball and former rocker turned London executive who performed a charming rendition of “Our Last Summer.” Eucalano’s Bill is an adventurer who doesn’t want to be tied down by marriage or children, but quickly forms a soft spot for his possible daughter.

The core cast was rounded out by Annabel Pyne as Tanya and Karah Abarca as Rosie, Donna’s two best friends and former band members. They brought nonstop laughs to the production, especially in numbers like “Dancing Queen” and “Does Your Mother Know?”

The entire ensemble had plenty of chances to shine. Some highlights included a chorus line of dancers in scuba gear during “Lay All Your Love on Me” and an encore of “Waterloo” during the bows, complete with sparkly disco costumes.

After two years of social distancing and canceled theater, the students on stage had plenty of smiles to go around. Neal praised their commitment and dedication.

“Each and every one of them came back this year with a newfound excitement and desire to perform,” she said of her students. “I had hoped that choosing a show like ‘Mamma Mia!’ would only help ignite that passion and commitment within my students, and they exceeded my expectations.”

And as the curtain dropped, that passion was appreciated by the audience members as well. After two years of dark stages across the Lehigh Valley, they couldn’t help but say, “Thank You for the Music.”