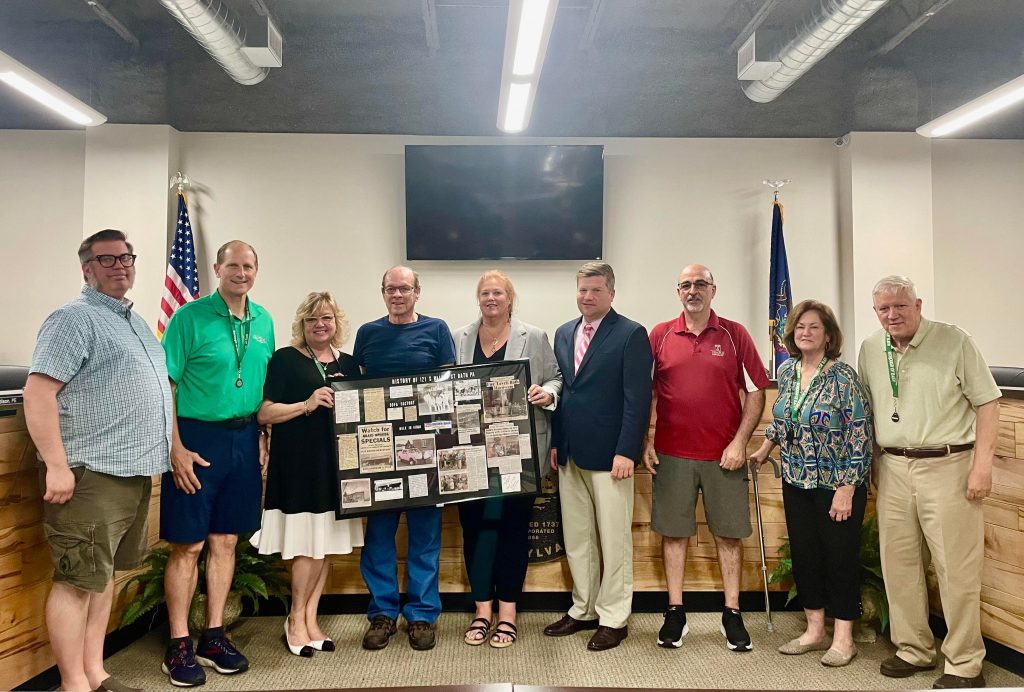 Mayor Fiorella Mirabito began by welcoming the borough’s new code enforcement officer, Michael Kovach, who proudly served as an officer with the Colonial Regional Police Department for 25 years before retiring in March.

Mayor Mirabito said, “You’ll see Mike out and about, taking care of our quality-of-life ordinances, any issues with parking, inspections on cars, and all sorts of good things.”

The council and residents welcomed Kovach with a warm round of applause, and Mayor Mirabito added that he was an asset to the Colonial Regional police force and is sure he will do a great job as a code enforcement officer in Bath.

Next, Blaine Hoffmeister of the Bath Borough Hall and Museum compiled a collage of articles related to South Walnut Street in Bath and presented it to the council. Council thanked Hoffmeister and posed for a photo with his gift and council Vice President Frank Hesch declared that Hoffmeister is a wealth of knowledge regarding the history of the borough. Hoffmeister will be helping out with Old Home Week in August for the History of Bath display presented by the Bath Museum during the dinner on Friday, August 19. Hesch added that the Old Home Week History Night dinner will be held at the American Legion, Post 470.

Another resident commented on how wonderful the Public Works Department has been doing with taking care of the parks and pressure washing Monocacy Creek Park. He also brought up a situation from a few months ago in relocating the loading zone in front of Villa Grande Pizzeria Restaurant on West Northampton Street. He thanked the council for previously addressing the situation. The resident stated that the north side curb is painted yellow, which is a no-parking zone, and the area across the street where the loading zone got moved to is red, which is a fire zone and is also a no-parking zone. The resident stated that this is confusing and hopes the council could come up with a solution such as signage stating the area is used as a loading zone during a certain time or painting that part of the curb white to allow for loading.

Various residents attended the meeting in support of Mattie’s Strudel Haus and owner Kelly Vlasics addressed the council stating she wants to fix the issue regarding signage with the borough amicably. Vlasics stated she is very upset about the removal of her signage because no one notified her before throwing the signs she had made away. Vlasics stated she put the signage on the telephone pole near her business on West Main Street because she fears her customers will be hit by transport trucks. Vlasics expressed she was unaware she could not put signage on the pole and wished someone would have come to her to discuss the matter because she felt singled out. The council thanked Vlasics for her feedback and comments.

In other news, the Bath Borough fire report for May cited 21 calls for the months, consisting of five EMS calls and 16 fire calls, totaling 121 total calls this year.

During committee reports, Vice President Hesch reported Hanover Township has asked the borough to join the other municipalities in the official membership of Nazareth Area Council of Government (NAZCOG). Council members amended the agenda to add the approval of this item, and the council approved the membership unanimously.

Vice President announced that the posters for Old Home Week are available and asked homeowners, business owners and property owners to decorate their properties in red, white, and blue during the weeklong event beginning Sunday, August 14 through Saturday, August 20. More information can be found on Facebook or residents can email batholdhomeweek@gmail.com.

The Parks and Recreation Committee announced there will not be a concert in the park on Friday, June 24.

Next, Mayor Mirabito expressed that she had a meeting with Lieutenant Brian Roberts and Lieutenant Seth Kelly. Kelly survived four gunshot wounds to his neck, shoulder, and leg during a traffic stop on Pennsylvania Highway 33 on Nov. 7, 2017. Mayor Mirabito stated she was “humbled and honored” to meet Kelly, who will be the new Station Commander and point of contact and will come to the Coffee with a Cop and Trick-or-Treat with a Trooper events that are planned.

Mayor Mirabito added, “We are very fortunate in this borough—our crime stats are low! State Police are here, whether you see them or not, and they are doing their job.”

This year to date, there have been 310 incidents in the Borough of Bath, mostly domestic, motor vehicle crashes, and requests for assistance.

“If you see something, say something!”

Councilwoman Phyllis Andrews announced that there will be no parking on both sides of Broad Street from June 6 through July 4 due to water main construction, which may be extended due to a delay with the contractor.

In other business, Proposed Ordinance No. 2022-722, an ordinance amending the zoning ordinance relative to adult movie/picture theaters and cabarets permitted as a special exception use in the Ch-1 Commercial Highway with Residential district, changing to a special exception use in the MC Manufacturing Commercial zoning district was approved by the board unanimously. The ordinance amends certain terminology and organizes the districts to reduce businesses from being discriminated against, which has not been updated since approximately 1978. This ordinance amendment will also require businesses to apply for approval in front of the Zoning Hearing Board and updates regulations.