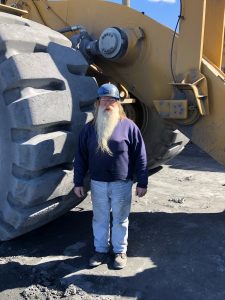 Mr. Keith Fogel was raised in the Nazareth area in a family of ten. He attended Nazareth High School and as a youth worked on a neighbor’s farm while his brothers and sisters worked at the Buza’s Farm Greenhouse. He later worked at Warner Metal and Kramer Textile in Nazareth.

He remembered, “I worked on a twisting machine earning $3 an hour.”

The next step was working in the pack house. Keith’s supervisor was George Gasper. When the quarry needed extra men, Mr. Fogel responded. Starting as a truck driver, he became a utility man learning every job in the large quarry operation. Utility men operate all the equipment trucks, loaders and crushers.

With a smile he said, “I like the job, the environment, being outside; I work with a bunch of good guys, we work as a team. The experienced crew includes Joseph Duch, Anthony Gregory, Robert Hershman, Garrett Kreglow, Jason Klotz, mechanic, Frank Kumernitsky, James Mills, Mike Seier and supervisor and former U.S. Marine Mike Smith, all solid quarry men.”

Keith continued, “The quarry works two shifts, winters are tough with snow and ice. In the past our equipment was used to clear highways and local roads during heavy snow storms.”

Safety is a major concern working in a quarry.

One old-timer said, “Your first accident could be your last accident.” Because of this, extreme care is taken in the operation.

Mr. Fogel said, “Each Friday we have a safety meeting to keep us alert on all safety issues.”

Keith and his team load 100-ton trucks with cement rock every shift, thousands of tons are crushed and moved to the plant by a conveyor system in a safe manner.

Mr. Keith Fogel is very friendly. He has moved mountains of stone over the years at Keystone. He is truly a very experienced and dedicated employee.

Keith has been married to Sheila Scheneberger for 44 years. They are proud of their daughter Sarah. The Fogels reside in Walnutport.

We wish Mr. Fogel and our friends at Keystone a safe and prosperous 2022.