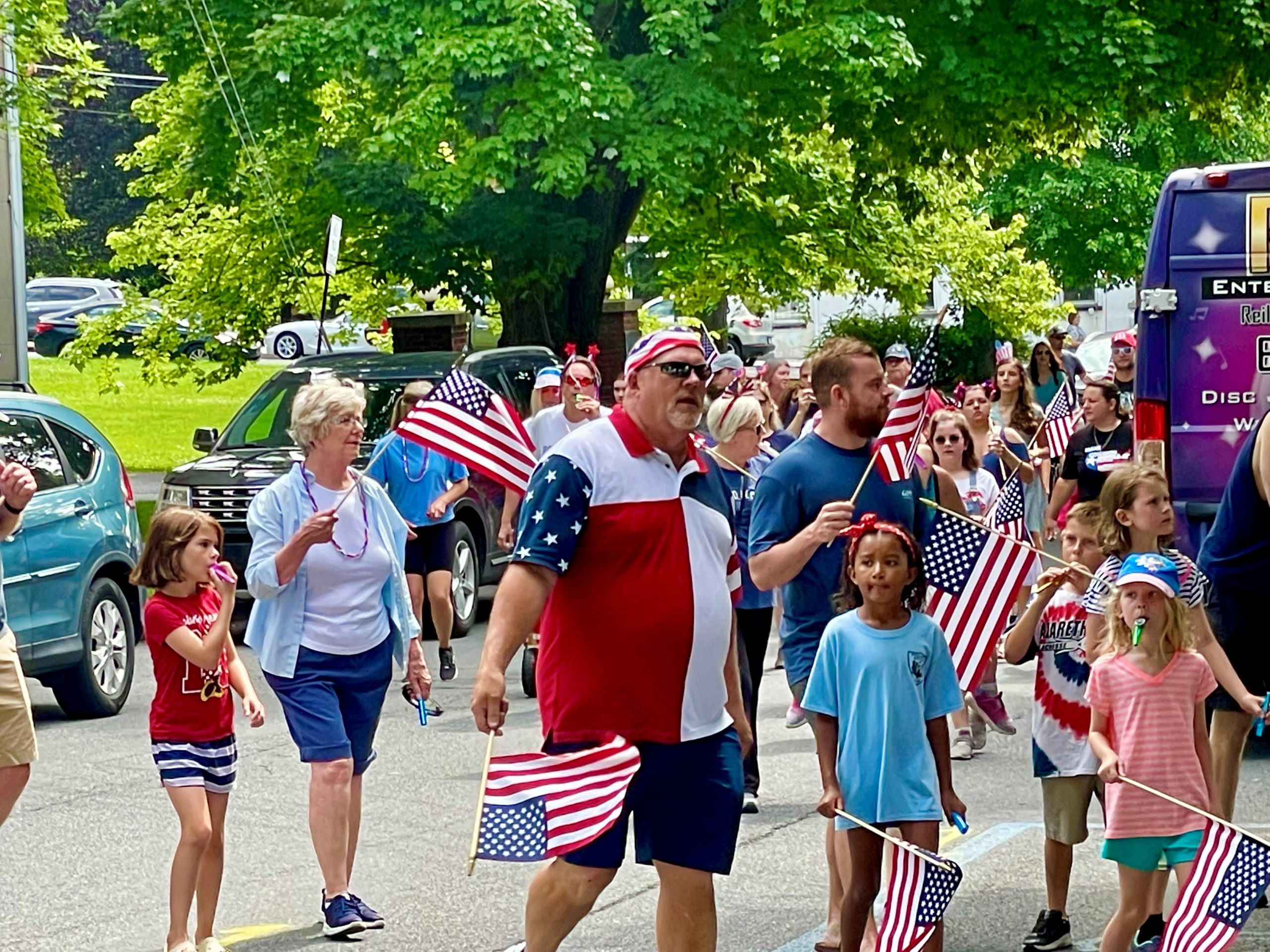 The Nazareth Area Chamber of Commerce held their annual kazoo parade on Saturday, July 2. Residents decked out in red, white, and blue showed up for this Fourth of July tradition, kazoos and flags in hand as the forecasted rain was replaced by sunny skies and smiling faces.

The tradition began back in 2005 when Nazareth tried to break the world record for the largest kazoo ensemble of 5,190 people playing kazoos at once. However, with the original parade only amounting to three or four hundred participants, the record was not broken. Instead, the kazoo parade became an annual fun-filled tradition as participants celebrated the USA.

Residents met at the Nazareth Area High School and at 10 a.m. the parade began marching through the streets of Nazareth, which was led by the Nazareth police and the Nazareth fire department. This year’s parade veteran grand marshal was Helena Lazzarini who served in the US Navy for 15 years and is now the proud owner of Naz-O-Nut, a donut shop in Nazareth equipped with their own pink and white donut van they patriotically decorated for the parade.

Sirens sounded and parade goers played their kazoos all the way to Veterans Memorial Square, where a program was held by the Nazareth Area Chamber of Commerce. Speakers blaring “Born in the USA” played as residents gathered in the square and Executive Vice President of Affiliated Chambers and Nazareth Area Chamber Liaison Jessica O’Donnell began the program.

Brielle from All Things Brielle kicked off the ceremony with her beautiful rendition of the National Anthem.

Next, O’Donnell thanked the Nazareth Army Navy Store for providing flags for the parade, the Nazareth Music Center for providing kazoos, Vigilance Hose Co. No. 1 for leading the parade, Riley Entertainment for providing the sound system, and gave a special thanks to the Borough, their public works team, and their police department for their effort in making the event possible.

Congresswoman Susan Wild then took to the microphone to share her pride for our nation. 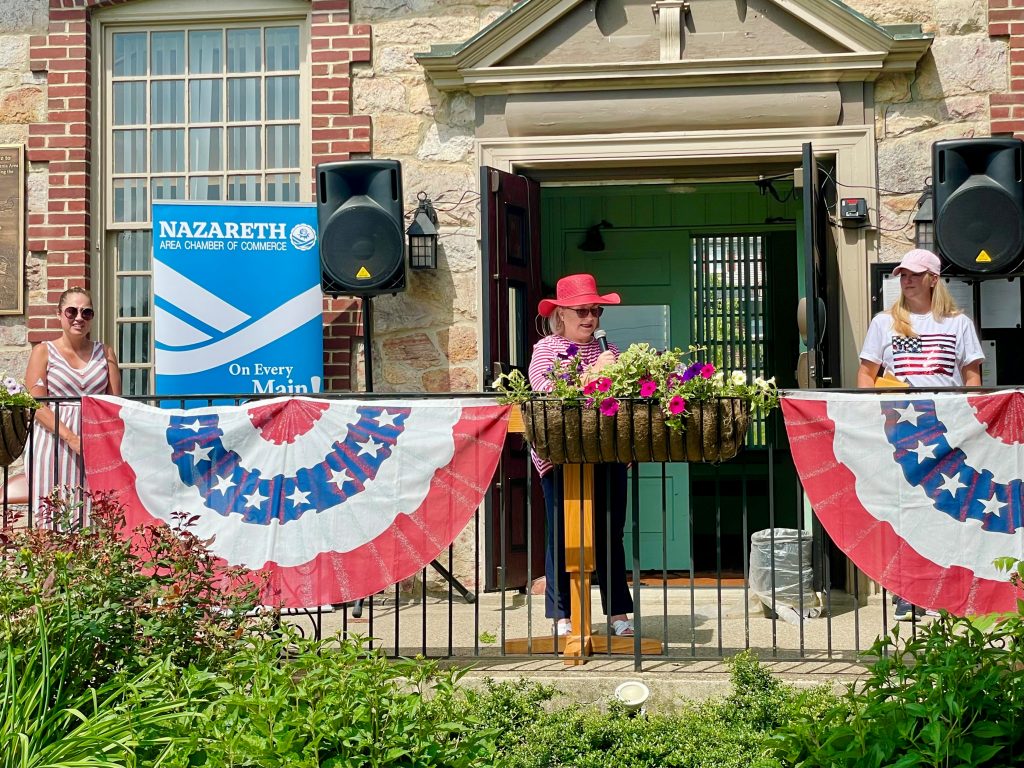 “In the 246 years since the founding of the United States of America, we have experienced times of great unity and success and periods of great struggle and division. Our country has always been about striving to be better, to creating more perfect union, to provide more opportunities to all, to fully exercise the inalienable rights we carved out in our Declaration of Independence: the right to life, liberty, and the pursuit of happiness. These rights and all others that we hold dear and fight to protect are what make Americans Americans. These are the rights that my father fought to protect in the Air Force, the rights my mother exercised as a journalist, and the rights I fight to protect and expand upon in Congress.”

Wild also went on to say, “Our nation was not born out of easy choice, but out of dedication of freedom and liberty to ideals that we all hold dear. That is what we celebrate on our Independence Day—the promise and the potential and the internal seeking of a more perfect union, founded on the principles that we are all created equal, and we are all entitled to life, liberty, and the pursuit of happiness. Happy Independence Day!”

Following, Nazareth Mayor Lance Colondo thanked all for coming to the parade and shared his gratitude for our country, “I want to acknowledge our fire police, volunteer fire company, police department, and public works department for helping put this event together and providing a safe parade route.”

Colondo added, “Over time, the kazoo parade has become a fun and quirky annual event in Nazareth and continues to be fun for all to participate in each year. With that said, I want to remind everyone that more importantly, on Monday, July 4, 2022, our nation celebrates 246 years of independence as on July 4, 1776, the second continental congress unanimously adopted the Declaration of Independence, announcing the colonies’ separation from Great Britain. Let us remember and celebrate that we are fortunate to live in the greatest country in the world, the United States of America.”

Colondo also gave thanks to the brave men and women who have fought over the last 246 years to keep the country safe and free.

Mike Woodland, Immediate Past Chairman of the Nazareth Area Chamber board stated, “We honor all of our local veterans as a focus of this year’s celebration,” which was followed by the playing of the Armed Forces Medley.

Brielle from All Things Brielle followed the remarks by singing “America the Beautiful” before singing a special song her father wrote.

Last, Woodland wished all a safe Fourth of July weekend.

Later this month, Martin on Main festival will be back on Saturday, July 30 from noon. to 7 p.m. in the Nazareth Circle and South Main Street to Belvidere Street, which will feature live music, food vendors, beer and wine, artisan and craft vendors and more. More information can be found on the Nazareth Area Chamber of Commerce website.