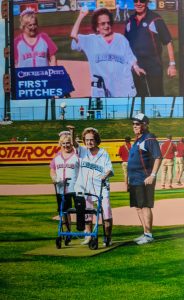 Pearl Eberts, a lifelong resident of the Bath area, threw the first pitch at the August 7 IronPigs baseball game in celebration of her birthday. After just a few bounces, Pearl’s throw went right to the catcher’s mitt; not too shabby as she just turned 103 years old.

Pearl is an avid IronPigs baseball fan and her recent throw was her fourth one. She also pitched at ages 94, 100 and 102.

After the catcher caught her pitch, she blew kisses to fans in the stands. The crowd absolutely loved her and some of those in the crowd even recognized her from previous birthday pitches.

Her family and friends gathered in a dugout suite behind home plate at Coca-Cola Park for their August birthday celebrations.

When asked by a friend if she had practiced for her pitch, Pearl showed her delightful sense of humor and simply replied, “No, I played softball in high school!”