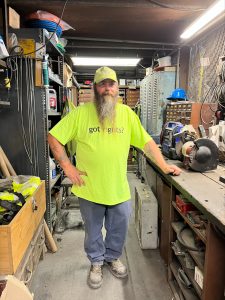 Mr. Darius Post was raised in the Nazareth area. At age 12 he worked on the Maple Grove Dairy Farm. He graduated from Nazareth High School in the vo-tech program in 1994.

He enlisted in the U.S. Marine Corps saying, “We had intensive training at Parris Island where they stressed discipline, respect and teamwork.”

The young marine was trained as an equipment mechanic and assigned to Okinawa in the Pacific, to a large U.S. military base, where he would be an instructor for motor transport. Completing four years of service, he returned home and worked at both Honeywell and the Hunterdon School District.

Mr. Post’s cement odyssey started in 2007 when he was hired by Hercules-Buzzi Unicem, joining his father Darius Sr. who worked at the plant as a millwright for 44 years.

He said, “Today I use my mechanical training working on equipment in the quarry and in the plant.”

Both his father and retired quarry mechanic Lloyd Pittenger shared their wealth of knowledge with him.

With a smile on his face he said, “I love my job and enjoy repairing equipment. I work closely with Chris Higgs, Casey Reiger, Barry Cole and a group of good, hard-working men.”

Darius also keeps parts and maintenance records with monthly reports. He is also a member of the safety committee, led by Dale Womer, and serves as shop steward for the Teamsters Union.

In his spare time, he hunts and bowls at the Bath American Legion. Mr. Post and his wife Christine have been married for 21 years and are proud of son Tristan. They reside in Bethlehem Township.

A dedicated cement worker, we thank Mr. Post for his service to our country and wish him and all our friends at the century-old plant a safe and prosperous year.