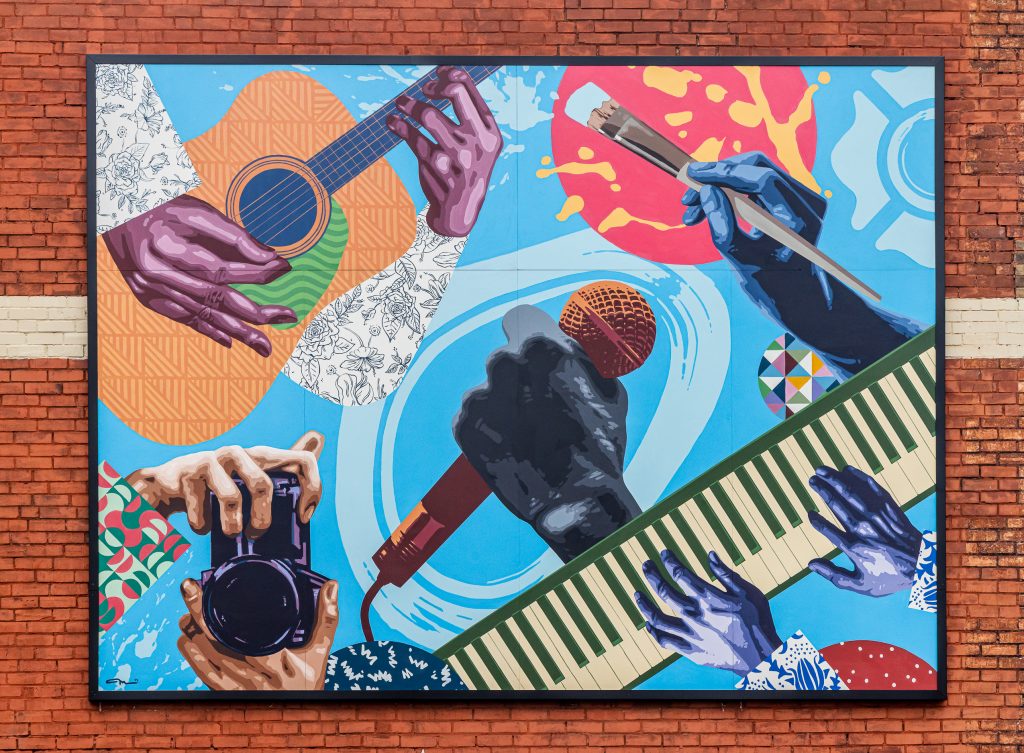 Nazareth Center for the Arts Board President Jenny Swanker said the mural would be dedicated to the Borough of Nazareth for the renovation of the historic firehouse, built in 1902, which was transformed into the art center in 2009.

Swanker stated that the mural is a symbol of progress in Nazareth and that it will help bring more local tourism to Nazareth.

“The new mural is the epitome of our mission to inspire and celebrate the visual and performing arts in Nazareth and the Lehigh Valley. We believe that this mural will positively impact Nazareth and promote more murals and other public art here. I think that this response from the crowd perfectly illustrates the community excitement and engagement for our local art scene,” Swanker shared.

Muralist Matt Halm thanked the art center and Swanker for bringing everything together, which he stated was no small task. Halm also shared there was careful consideration to put the mural on six aluminum composite panels so that it would not be painted directly on the historical building.

“I painted [the panels] in my tiny little studio, which is also known as my shed, so I can only paint about two of them at a time and then create sort of an assembly line to match the seams,” said Halm.

Halm stated the panels were then put together on the ground and hoisted up with a crane, which was the first time he had ever seen that done for any of his artwork.

Halm expressed, “We were inspired by the arts, by celebrating and honoring artists, and furthering the mission of Nazareth Center for the Arts.” Halm said he liked the idea of using hands in the mural as they are “where all the imagination comes through and actually creates the art.” Halm went on to say he thought it would be an interesting way to show art actually being created, using bright colors and patterns.

Some of the references in the mural include a guitar that is modeled directly after a Martin D28 model, a firefighter emblem as an homage to the firehouse that the art center now occupies, a microphone, circular shapes that represent records, the shape of Nazareth Speedway from an aerial view, and the rose pattern on the shirt represents the historical Barony of the Rose.

Halm expressed that the creativity and colorfulness of the mural are “ways to show the broad range of creativity and the diversity of people that create art in Nazareth.”

“A mural celebrating the arts should be artistic and bold, so I think we accomplished that for sure. Hopefully this will be a jumping off point to much more public art in Nazareth and the surrounding area,” Halm shared.

Be sure to check out Nazareth’s new mural located on the side of the Nazareth Center for the Arts building, located at 30 E. Belvidere St.