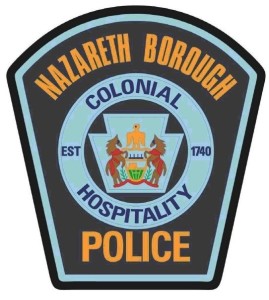 At Monday night’s borough council meeting, political blogger Bernie O’Hare and Nazareth resident Trevor Gehret expressed concern about the actions of the Nazareth Police Department and sought to have the council investigate any wrongdoing by officers.

O’Hare presented council with a resolution that was also posted on his blog, Lehigh Valley Ramblings. The resolution, while mostly allegations against Police Chief Thomas Trachta, also cited other examples of misconduct. One of the officers, Eric K. Schwab, was named in the resolution:

“WHEREAS, he refused to take any disciplinary action against another part-time police officer (ERIC SCHWAB) who, after responding to a domestic disturbance on June 9, 2014, returned and drank with one of the victims;”

On June 7, 2014 I was invited to Beth [last name redacted]’s residence after my shift in Stockertown. At approximately 0020 hours I arrived at her residence and discussed PA Game Commission Hunters Safety Classes with her. Beth related that her daughter wanted to go and I had a friend who is very involved with this and can help. While at Beth’s residence I also spoke with Brian Keat about firearms and the September 11 attacks on the World Trade Center. We also spoke about this date being the anniversary of Trooper Miller’s death and that it was a point in my Police career that really has left a mental scar.

Beth had asked me what was going to happen with Thomas Davis and I explained that she would be subpoenaed and the criminal justice system would run its course. I advised her that she may or may not have to testify depending on how Davis wanted to proceed with his attorney.

At no time was I on official duty, or wearing a Nazareth Borough uniform clearing [sic] seen by the bright yellow stripes on my pants issued by Stockerton. While at the residence I did consume a couple beers before leaving.

Schwab did not address other allegations in the resolution, including:

“WHEREAS, he has created a culture of intolerance for any criticism of the police department that resulted in Officer Eric Schwab posting a Facebook comment asking fellow police officers to “light this [expletive] up” in response to factual criticisms made by O’Hare on his blog;”

The Home News contacted O’Hare for his response; he has no comment at this time.

O’Hare’s response when he learned of Schwab’s statement: “Officer Schwab has admitted to unprofessional behavior. After responding to a domestic disturbance, he returned and drank with the victims. He was never accused of drinking on duty, but fraternization with the victims of a domestic disturbance is extremely inappropriate, whether on duty or not. So was Officer Schwab’s Facebook threat to me.”