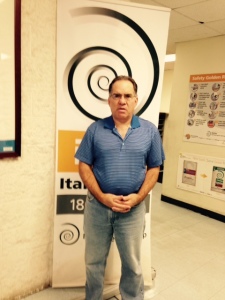 Mr. Peter G. Zagar was born in Stanford, Cali. and graduated from Los Altos High School in 1973, where he was a member of a stellar track team, which was undefeated from 1959-73 winning the state championship. His father had been a scholarship student who played football and was a record holding discus thrower at Stanford University.

Zagar graduated from San Jose State with degrees in Geography and Geology in 1977. He recalls, “As an intern, we saw the former secret U-2 reconnaissance aircraft and interpreted photographs taken by the plane.” Zagar has a comprehensive and compelling employment resume. He said, “My first job was with Kaiser Cement in Cupertine, Cali. as a rock plant engineer where I could use my Geology degree.”

His work odyssey has given him many interesting and challenging opportunities. Between 1980-85, he supervised a massive quarry in Lucerne, Cali. He stated, “I always enjoyed working in quarry operations. My next challenge took me to southeast Michigan to manage a million ton operation. In 1991, Oregon called and I worked on some of the first super fund cities with an environmental company which designed landfills.”

His vast aggregate knowledge led him to Hanson Aggregate where he was an environmental manager for 26 facilities. There was National Cement in Lebe, Cali. and a chromium mine in Oregon. He said, “Last year, I was hired by Essroc as their safety manager to update the safety and training program. I work closely with MSHA, a federal agency that usually conducts six inspections annually at the plant, quarry, and grinding operation. We stress safety and I found a great spirit of cooperation working with our supervisors and employees.” The corporate safety director for Essroc is Ms. Ginna Facca.

When asked about reports, Zagar replied, “I spend at least 50% of my time on paperwork.”

Zagar’s employment experiences, professionalism, and brand knowledge are impressive. An amiable gentlemen, Zagar certainly is a highly qualified and valuable employee. He is very proud of his son, Steven, an Apple employee, and his Croatian heritage.

Zagar resides in Bowmanstown and spends his free time fishing, mountain-biking, and bird-watching. We wish continued success to Zagar and all friends at Essroc. We hope to return again next year to honor more dedicated cement workers.