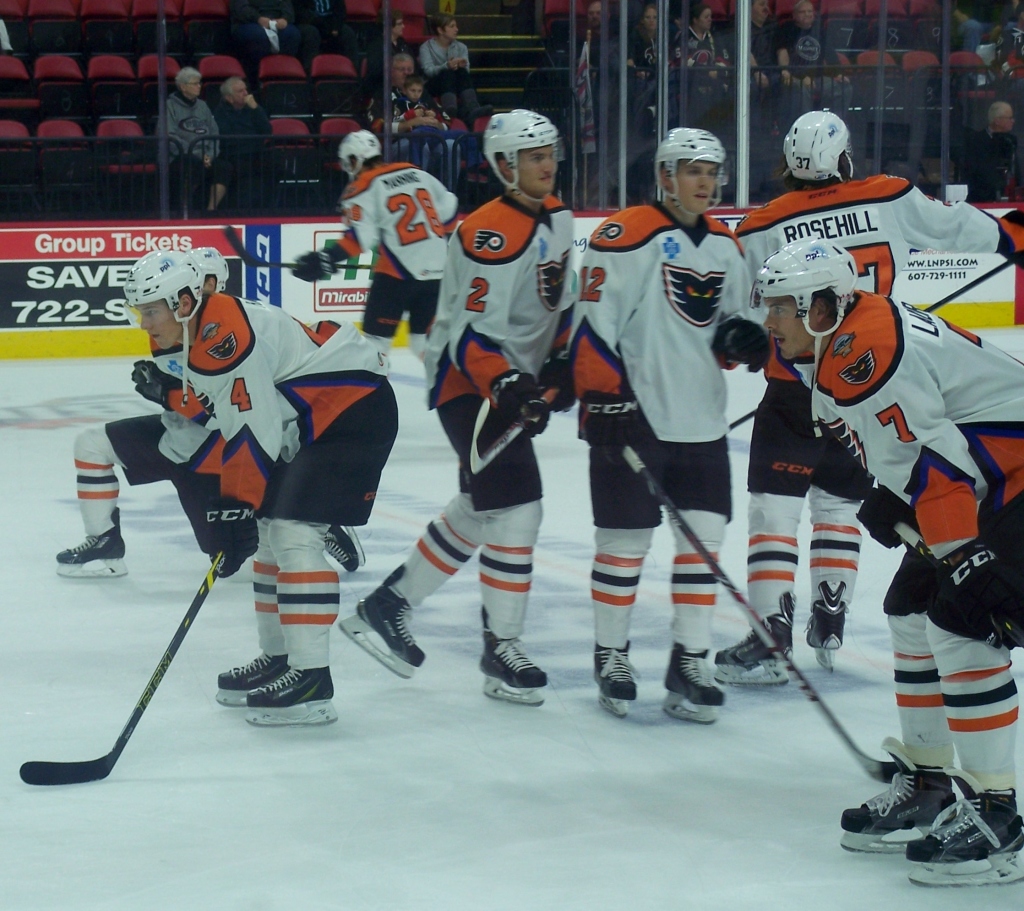 Despite all that transpired over the weekend, the Lehigh Valley Phantoms battled their way to two victories in their first three games in three nights set of the season.

Before Friday’s game, rookie defenseman Shayne Gostisbehere was recalled by the Philadelphia Flyers. That made an already young core even more thin, with only six blue liners on the roster.

It looked as though they would start the weekend off with a loss to rival Hershey, trailing 2-1 in the third period – vastly out shot and out chanced. With six minutes left to play, rookie forward Taylor Leier tallied his first pro goal to tie the game and the Phantoms scored on their next two shots to turn the tides. The three-goal outburst in 1:53 of play gave them a thrilling come-from-behind win at home, their second exciting finish in front of the home fans at PPL Center in just their second home game of the season.

“It’s awesome, especially at home” Leier said of the third period rally Friday night. “Scoring three goals like that was pretty cool. It’s good for the city to get the fans behind us, they’re excited for every game. It was a good feeling, but it was just good to chip in and get the win.”

Saturday saw more adversity as forward Petr Straka was held out with an injury, in addition to forward Brett Hextall’s absence this weekend due to injury. The injuries continued as defenseman Mark Alt left the game in the first period with an apparent upper body injury, forcing the Phantoms to play down a defenseman the rest of the game.

More trouble struck halfway through the first period as a fight broke out and enforcer Zack Stortini was ejected from the game, leaving the Phantoms bench short two players for the final 50 minutes of regulation.

The Phantoms scored three unanswered goals in the second period and looked well on their way to a 4-2 win in the final 30 seconds of the third, but their opponent – the Binghamton Senators – tallied two goals in the final 15 seconds to tie the game and force overtime.

The Senators came on strong in the overtime period, with momentum on their side after scoring two goals 8.7 seconds apart in the final seconds of regulation. Like the Phantoms did on Friday night, they found a way to win. Promising rookie forward prospect Scott Laughton tallied the game-winning goal with 1:20 left in overtime to lift the Phantoms to their fourth win of the season.

“Obviously it’s not what you want to do,” Phantoms assistant captain Darroll Powe said after the game. “Kind of blew a two-goal lead with a minute left, but we showed a lot of resiliency, battled back and got that goal by Laughts [Scott Laughton].”

Prior to Sunday’s game in Hershey – the Phantoms’ third game in three nights – the league suspended forward Jay Rosehill for three games for an illegal check to the head of an opponent in Friday night’s game. With Rosehill joining the list of players out of the lineup, the Phantoms were without five players who started the weekend on the roster.

The injuries, call ups and suspensions caught up with them in Sunday’s game in Hershey, as the Bears took a 2-0 lead into the third period and tacked on an empty net goal in the waning moments to preserve a 3-0 shutout win over the Phantoms – the first time they had been shutout this season.

With victories on Friday and Saturday, the Phantoms earned four out of a possible six points in the standings. At 4-2-0-0 on the season, they are tied for second place in the East Division and look ahead to breaking that tie with the Wilkes-Barre/Scranton Penguins (4-4-0-0) when they host them on Wednesday night (October 29th).