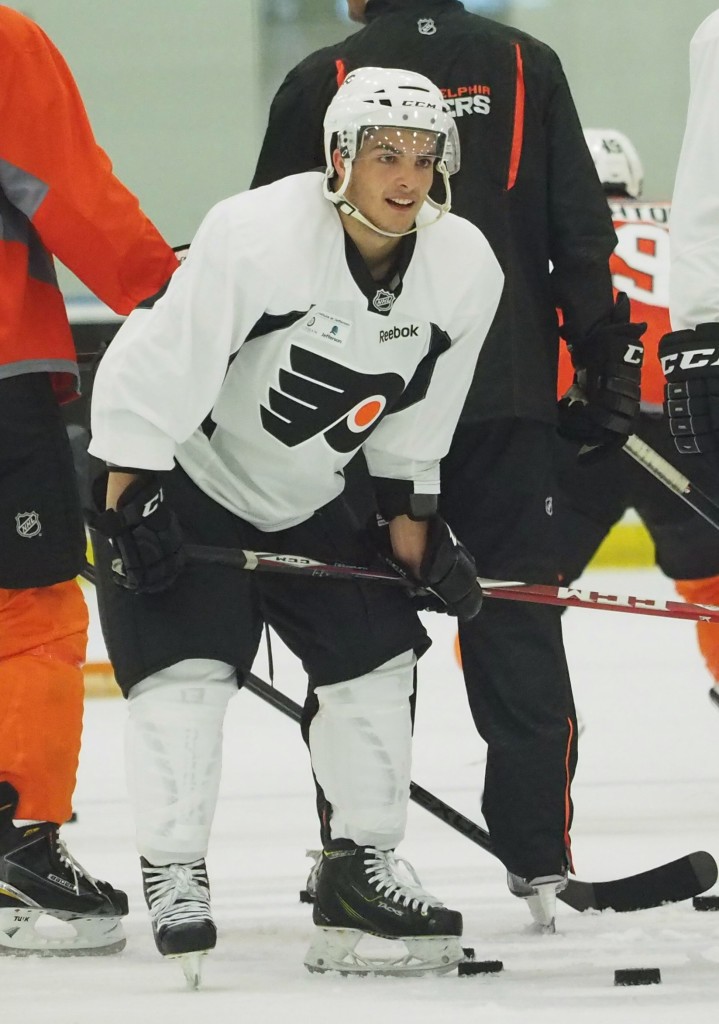 Small and speedy, Danick Martel is looking to take his game to higher heights in 2015-16.

Though undersized and undrafted prior to signing an entry-level contract with the Philadelphia Flyers this past spring, Danick Martel carries a certain swagger about himself that is easily noticeable upon talking to him or seeing him on the ice.

“I’m here to learn for sure, but I need to be a leader too,” Martel said at Flyers Development Camp last month. “I’m not a veteran, but I played five games last year with the Phantoms. I know how to be a pro and I need to be a pro starting right here.”

Martel joined the Lehigh Valley Phantoms at the tail end of last season after posting 102 points (48 goals, 54 assists) in 64 games in his fourth season of junior hockey in the Quebec Major Junior Hockey League (QMJHL). In five AHL games, Martel posted a goal and two assists while displaying some serious skating ability – noticeable even at the pro level.

“The first one is done,” Martel recalled about his first taste of pro hockey. “Next year is a new year. I’m now a pro. I know how the game is played. I just need to act like a pro and play like a pro and everything will go well.”

In his second AHL game, Martel showcased why he was signed to an NHL contract. Although he views his first pro goal as “an easy one”, Martel’s effort in the final minute of the Phantoms’ 4-1 win over Hershey back on April 15th gave Phantoms fans perhaps a glimpse of what is to come.

“Empty net is an easy one, but I powered for it and got it,” Martel said after that game in April. “The D-man was standing still, so I just passed by him with my speed. It proves I have a lot of speed, I just need to use it.”

Martel displayed that blazing speed that scouts and those in the QMJHL have been talking about – blowing past a defenseman at the blue line and despite being blatantly tripped, stuck with the play to tally his first career pro goal in the final minute to complete the 4-1 win.

Despite playing in five AHL games last spring, the 20-year-old forward will be entering his first full season of pro hockey this fall and has plenty to learn at the pro-level this upcoming season.

“Battle 1-on-1 on the wall,” Martel stated as an aspect of the game he needs improvement in. “I’m a smaller guy for sure, but I need to better my puck [control] and keep it away from the bigger guy.”

As for what Martel is hoping to accomplish this season, the 5-8 forward is setting the bar high.

“I want to play a full season but I want to touch some ice for the Flyers,” Martel said, adding, “It’s my goal this year – a few games with the Flyers.”

Paw Prints on the Canal gets tails wagging