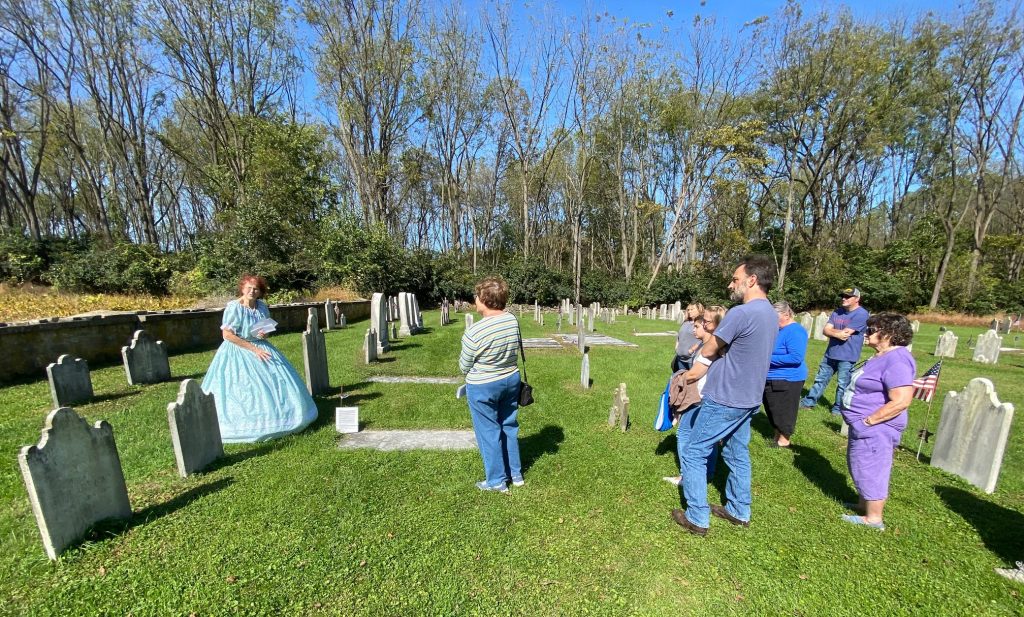 On Saturday, October 2, the Horner’s Cemetery Historical Society celebrated the 293rd Anniversary of Craig’s Scotch-Irish Settlement with guided tours, reenactments, and the opportunity for visitors to meet with other local historical experts.

In 1728, sixteen families of Scotch-Irish heritage, led by the Craig family, settled in Northampton County near what is today Bath Borough. This settlement was one of the earliest in the Lehigh Valley, even older than the Moravians in Nazareth. By 1731, Horner’s Church was built and by 1745, Horner’s Cemetery was established. The settlers faced many of the threats common on the Pennsylvania frontier in the 18th century, including disease and fighting with local Native American tribes.

Those resting in the cemetery include 21 veterans of the French & Indian War, the Revolutionary War, the War of 1812, and the Civil War. Others include a delegate to the Constitutional Convention and an ancestor of President Truman. Perhaps the most famous individual is Jane Horner, the first woman in Northampton County who was killed by Native Americans during an attack that spread throughout Northampton and Whitehall.

Names that mark the headstones include many that residents of Northampton County would recognize today: Palmer, Horner, Brown, Ralston, and Wilson.

“Don’t think you don’t have relatives here,” said Moser. “You’d be surprised.” Some descendants are located as far away as California and even Australia.

While burial records indicate that there are 250 people buried in the cemetery, only 125 headstones have been found. Between the last burial in 1945 and 2008, the cemetery had fallen into disrepair. It was then that Moser led the charge to restore the cemetery, identify those buried, and share their stories.

Visitors to the anniversary celebration got to hear those stories, explore historical records and old photos, and meet reenactors like the Rogers’ Rangers French & Indian War reenactors and the 153rd Pennsylvania Civil War reenactors. Local historical societies, like the Whitehall Historical Preservation Society, were also present.

Guided tours of Horner’s Cemetery are available by appointment by calling 610-837-1757. Suggested donations are $5 for veterans, seniors, and children over 10 and $10 for adults.