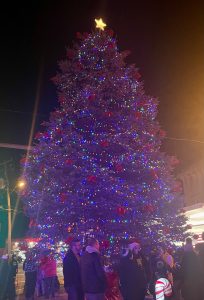 On Sunday, December 4, the Borough of Northampton held its annual tree lighting ceremony with several special guests at the triangle on Main Street and Laubach Avenue.

Borough Manager LeRoy Brobst introduced the Pennsylvania Classical Ballet Academy first as they put on a magical rendition of a scene from “The Nutcracker.” Brobst called it: “Another Hallmark moment.”

Then, the Good Shepherd Catholic School Choir sang “Frosty the Snowman,” “All I Want for Christmas (Is My Two Front Teeth),” “Nuttin’ For Christmas,” “Santa Claus Is Coming to Town,” “Walking in a Winter Wonderland,” “We Wish You a Merry Christmas,” “Jingle Bell Rock,” “Let It Snow,” “Jingle Bells,” “Rudolph, the Red-Nosed Reindeer,” and “Here Comes Santa Claus.”

Later, Santa and Mrs. Claus rode in on their sleigh and gave out treats to the little ones after posing for pictures. All of the children were very excited to see Santa.

“I’d like to thank our fire/police for taking care of traffic control and all of the volunteers behind the scenes,” said Brobst.

Mayor Anthony Pristash also thanked the fire department, police department, and gave a special thanks to the Public Works Department who helped put everything together.

“On behalf of everyone on borough staff and borough council, I want to wish everyone a Merry Christmas and a Happy New Year,” Mayor Pristash expressed.

This year’s tree was donated by Brian Welsko, assistant to the borough manager, and his family.